Mindfulness of the Mind

Mounting the Ox, slowly I return homeward. The voice of my flute intones through the evening. Measuring with hand-beats the pulsating harmony, I direct the endless rhythm. Whoever hears this melody will join me. 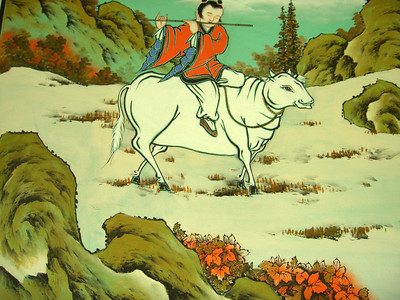 The Buddha recited the ninth step of Tranquil Wisdom meditation as follows:

As Venerable Ajahn Chah says, if we sit by A Still Forest Pool with any degree of agitation, the animals won’t come out for a drink. Only when we are as quiet as a pine tree by the pool will the animals come out.

Nimitta is the sign of nirvana. We are in the neighborhood of nirvana when it appears. Its appearance is the ninth step.

If a nimitta fails to appear, that means that we have rushed through at least one of the first eight stages.

If we experience no nimitta, we will need to go back and practice, with enhanced patience, the stages we rushed through.

However, the Burmese masters teach that enlightenment may occur even in the absence of a nimitta. I have no idea what they are talking about so we are following the Buddha’s teachings even though it is entirely possible that the Burmese masters have discovered an alternative path that works.

Once the nimitta appears, the tenth step is to “polish” it, in the words of Venerable Ajahn Brahm. His book, Mindfulness, Bliss and Beyond describes how to stop the nimitta from wobbling, i.e., how to strengthen it before moving on to step eleven.

His instructions are quite helpful, because the Buddha’s recital of the tenth step is:

Ajahn Brahm tells us how to gladden the mind.

In step eleven, with the nimitta now stable, we sustain it by the techniques taught by Venerable Ajahn Brahm.

Again, Ajahn Brahm’s specific instructions are helpful. The Buddha’s explanation of the eleventh stage is:

Step twelve – Entering into the jhanas

Step twelve, in the Buddha’s words:

According to Venerable Ajahn Brahm, once the nimitta is polished and sustained, the four jhanas and the four immaterial attainments may appear as the twelfth step.

Other scholars, however, teach that the four jhanas may be attained in step twelve, but the immaterial attainments are experienced in steps thirteen through sixteen, i.e., the last four steps of the Tranquil Wisdom meditation which we encounter in Step Seven.

Depending upon how well we keep the precepts and how well the nimitta is polished in step ten and made stable in step eleven, we may make it to the first jhana only, to the second jhana only, and so on. No jhana can be skipped, i.e., we cannot experience the third jhana unless we have experienced the first two, and so on.

Just like the joy of the fifth step, the explosion of joy associated with the first jhana usually causes the meditation to end. It takes practice to let the first jhana mature into the second jhana, and so on.

The jhanas transport us from the third world of sense desire to the second world of form, also known as the fine-material world.

In the Theravada teachings, there are sixteen dharma realms in the fine-material world.

The beings of the fine material plane of existence are no longer subject to sense desire and they have left the lower six realms, the desire or sense-sphere realm, never to fall back.

As the name of this collection of realms implies, however, the beings are free of the gross material world but they still have some connection to the material world and have not achieved anuttara samyak sambodhi, total liberation.

Development of the first jhana to an inferior degree leads to rebirth among:

Middling development of the first jhana leads to rebirth among:

Superior development of the first jhana leads to rebirth among:

Thus there are three planes of existence or dharma realms associated with the first jhana.

1. Vittaka which is translated as “thinking”;

2. Vicara which is translated as “examining”;

3. Piti which is translated as “joy, bliss or rapture”; and

4. Sukha which is translated as “happiness.”

So if we feel blissful but that bliss seems to “wobble,” as Ajahn Brahm says, that’s the first jhana.

In the same inferior-middling-superior development way, development of the second jhana leads to rebirth among:

The gods of Limited Radiance (17);

The gods of Immeasurable Radiance (16); and

The gods of Streaming Radiance (15).

How can we know if we have attained the second jhana? Well, the first jhana is exhilarating and it doesn’t last long. When the pounding bliss fades away, and only happiness remains, we have entered into the second jhana.

The second jhana is a more stable level of concentration whose primary features are serenity and solidity and it can last for hours; the first jhana is unlikely to last anywhere near that long.

Inferior, middling and superior development of the third jhana leads to rebirth among:

The gods of Immeasurable Glory (13); and

Superior development of the fourth jhana leads to rebirth among:

However, if the fourth jhana is developed with a desire for insentient existence (which seems to be a contradiction in terms), then it leads to rebirth among:

The Non-percipient gods (10) “for whom consciousness is temporarily suspended” to quote Bhikkhu Bodhi, author of A Comprehensive Manual of Abhidhamma.

Bhikkhu Bodhi, author of The Noble Eightfold Path, calls the sixteen realms (20-5) of the fine-material realm the “objective counterparts” of the four jhanas.

When I first read about these realms of consciousness, and the creative names by which they are known, my first reaction was to laugh. I thought the gods under the four great kings, the gods of the thirty three, and so on, were the products of someone’s over-active imagination.

I had the same feeling of comic relief when I first read about the levels of consciousness that belong not to the realm of desire but to the realm of form, enterable only through the jhanas.

I have no doubt that someone about 2500 years ago entered into very high levels of bliss and then wrote down his or her experiences.

We learn early in our study of Buddhism that the Buddha talked often of the impermanence of things. He taught that those who build their inner happiness on external things are doomed to lose their happiness because nothing lasts forever.

I am sure that a person who enters into the first jhana today, 2500 years after the experience of one early Buddhist was recorded, is unlikely to enter into Brahma’s Assembly, followed by meeting the Ministers of Brahma, and so on.

Brahma’s Assembly and all the other levels of awareness have morphed into something else by now.

A modern person who is ardent and resolute in the cultivation of Zen practices on an unrelenting, daily basis, will certainly enter into blissful states of mind and that bliss will increase in intensity with practice, but it would be nonsensical to believe that these states of bliss with these names will be encountered and that they will appear in the order as recorded by our ancient practitioner.

It’s fun to memorize these states of awareness (I can’t help it) but accepting them as factual, down to their names, would be ludicrous. They were one person’s experience thousands of years ago and we will have our own.

Note that in the Theravada dharma realm countdown, the non-percipient gods reside ten levels of awareness from the top.

Levels 9, 8, 7, 6, and 5 are the highest levels of the realm of form and these levels are the pure abodes of which the Buddha spoke, the realm of the non-returners. They are, from bottom to top:

The lifetime of the beings in these Pure Abodes increases “significantly in each higher plane.”

We can find in the Pali Canon how far these abodes are from the earth and the specific lifetimes of the inhabitants of each.

No kidding: Some people have actually done the math. They can tell you which Pure Abode is located near the orbit of Jupiter, for example. I hope their humor is intentional.

And if we take such facts literally, we’re nuts. The point is that there are levels of awareness beyond that of the fourth jhana but below the awareness of the immaterial world that lies beyond the world of form.

If the fourth jhana takes our awareness to levels of bliss that some creative ancient cultivator dubbed the gods of great fruit and the non-percipient gods, what meditation practice takes us to the five Pure Abodes, dharma realms 9-5 in the Theravada listing of dharma realms?

Answer: None. The Pure Abodes are like the Christian heaven; we have to die to get there. The five Pure Abodes are where non-returners are reborn. They cannot possibly be re-born into the first world of sense desire but they have not yet attained Nirvana.

But we humans can practice Buddha Name Recitation which the Pure Land teachers say will assure us rebirth in the Pure Land. This is technically not a meditation practice but it probably develops mindfulness and it probably can take a practitioner to the jhanas.

Since the fifth dharma realm is the highest of the six lower realms, it makes sense to make Buddha Name Recitation a practice of the unenlightened gods.

The Mahayana school does not teach Tranquil Wisdom meditation and thus does not teach cultivation of the jhanas. It has a different approach to the Pure Abodes, referred to in Mahayana texts as the Pure Land.