The whip and rope are necessary, else he might stray off down some dusty road. Being well trained, he becomes naturally gentle, then, unfettered, he obeys his master. 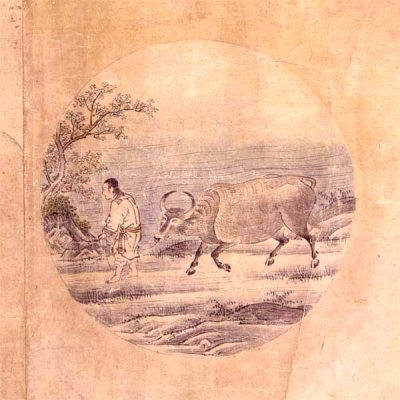 The central practice of the sixth dharma realm is Mindfulness of Feelings, the second of the four foundations of mindfulness. This practice is the antidote for the five hindrances of sense desire, ill will, sloth and torpor, restlessness and anxiety, and doubt, all of which are hindrances to awakening for those of us in the human dharma realm.

By practicing these next four steps, we reach the half-way point of the sixteen steps.

We practice in the human dharma realm. But when we master the four steps of Mindfulness of Feelings, we graduate to the fifth dharma realm, that of the gods of the six lower dharma realms. 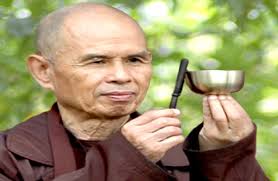 These steps can’t be forced to happen for obvious reasons. Only after we have followed every instruction, including the cultivation of happiness, the practice of loving kindness, and so on, can the fourth stage of catching the ox, evolve without effort and without tension into the fifth stage of the Ox-Herding pictures, that of taming the ox.

When feelings of extreme happiness explode upon us while we are enjoying the breath of the moment,  we will know that we have arrived at the fifth step of Tranquil Wisdom meditation. The happiness appears naturally; it can’t be willed. We don’t need to remember what the fifth step is. We can say: OK, I’ve watched the breath of the moment for a long time now – it’s time to get happy, but that won’t work.

We sit with patience and not with greed for the joy that announces we have arrived at the fifth step of our sixteen step meditation.

It is a bubbling, unstable level of delight that naturally evolves into a serene, more stable form of happiness as the sixth step. Ajahn Brahm teaches that this is not yet the joy and happiness of the first two jhanas; it is a herald, though, of what is to come.

Meditation is an art, not a science. Thus, both Ajahn Brahm and Venerable U. Vimalaramsi are right; it depends upon the practitioner. For some, the happiness of the fifth step of the Buddha’s Tranquil Wisdom meditation is a mere warmup for the real thing. For others, it’s the first jhana.

Most of us are jolted out of our meditation by the sudden experience of the bliss of the fifth stage, whether it’s the first jhana or not, and the meditation ends abruptly.

With practice, however, we can maintain our calmness and the stage five rapture will settle down into the stage six serenity that lasts a long time.

We remain aware only of the breath of the moment (the fourth stage) when stage five joy mellows into stage six serenity.

This is the sixth step in the Buddha’s words:

Note that he simply substitutes the word “happiness” for the word “joy” as used in the fifth step. Again, this implies that the trainee must remember that happiness follows joy and that the transition from joy to happiness can be willed. For most of us, the joy will naturally settle into happiness and we don’t have to make a conscious decision to make that transition.

Ajahn Brahm calls the breath of one who is experiencing the brief joy of the fifth step and the long-lasting happiness of the sixth step “the beautiful breath.”

The serenity is stable and long-lasting, unlike the unstable, short-lived rapture of step five. But Ajahn Brahm says this is still not the first jhana.

Step seven – Awareness of the end of breathing

As the serenity of the sixth step continues, there will come a time, said the Buddha, when the breath is no longer a physical experience. It becomes a mind object, a mental formation.

The meditator is no longer aware of the breath as something that is happening to a living body. From a physical perspective, the breath has become so subtle that it seems to have stopped.

We can understand experiencing joy and happiness, but how do we experience “the mental formation”?

The mind is now breathing. As Venerable Ajahn Brahm so eloquently puts it: In the seventh step of the Buddha’s meditation, the beautiful breath is gone, only the beauty remains.

At this point in his wonderful book, Mindfulness, Bliss and Beyond, he shows us an unforgettable connection between this seventh step and Alice in Wonderland/Through the Looking Glass. 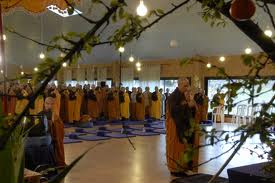 When the breath seems to disappear and only the beauty remains and the diversity of consciousness has been brought to this fine point, we still are not finished. As Ajahn Brahms says, there is more bliss to come.

But if we ignore the precepts, as so many modern Japanese, Tibetan and American masters seem to do (I am unaware of any scandal involving a Chinese master), we might as well embrace suffering because we always get what we want. Mick Jagger, who has practiced with Theravada monks in Laos, was wrong when he said we can’t. Yes, I know, it was just a song lyric, but everything is mind alone and we always get what we want.

After the breath seems to have faded away, we arrive at the eighth step, the Still Forest Pool made famous by the great Thai forest monk Ajahn Chah. We sit by the still forest pool in this eighth step of the Buddha’s Tranquil Wisdom meditation in absolute stillness and tranquility, and wait.

Venerable U. Vimalaramsi teaches that this step eight represents the third jhana, characterized by tranquility. The meditation is named after this step. So we see that the serenity of the sixth step mellows into the minimizing of breath in the seventh step and that mellows even further into tranquility.

The Buddha describes this eighth step as follows:

So instead of experiencing the mental formation of the seventh step, we now tranquilize that mental formation. This just means, apparently, that a feeling of tranquility will follow when the breath stops.

Venerable U. Vimalaramsi teaches that step eight is the fourth jhana, the jhana of equanimity. I suppose tranquility matures into equanimity.

If we become excited at our progress, such excitement ends the progress.

If we can make it to the Still Forest Pool, we are in the neighborhood of Nirvana.

If we can’t make it to the Still Forest Pool, we can’t move on and there is no reason to attempt to move on. Ajahn Brahm counsels us that whenever we feel our progress has stopped, we go back and repeat the steps of the meditation that we probably rushed through. Each step has to unfold naturally – we just can’t say: OK, that’s enough happiness, I’m going to start the serenity stage now.

We just sit and watch the meditation unfold all by itself. The mind is unfolding itself and the thing we call our self has nothing to do with it.

When the mind, at its own pace, arrives at the Still Forest Pool, it will stay there awhile. The remaining stages of Tranquil Wisdom meditation will unfold for us just as they did for the Buddha in the year we now call 528 B.C. (The Buddha was most likely born in 563 B.C. and experienced enlightenment at the age of 35).

By taming the ox we arrive at the Still Forest Pool. The mind is tamed. The mind is tranquil. The practitioner has become a meditation master and can catch the ox and tame it. What else could possibly need to be done?

We are just half way through the sixteen steps.

Yasutani Roshi says this is the stage where the meditator must vow to practice for another thirty years. 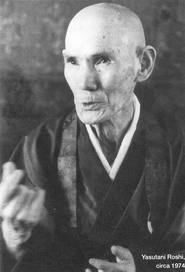 Just as the cultivation of peace and non-struggle, by practicing mindfulness of the body, is the antidote to the fighting and struggling of the asuras of the seventh dharma realm, practicing mindfulness of feelings is the antidote to the untamed mind, the mind subject to and controlled by sense desire, the mind of the sixth dharma realm of humans.

When we practice mindfulness of feelings, the whip and rope are no longer necessary. Our mind becomes well-trained and naturally gentle.

We have reached a point where further progress on the path becomes difficult if we don’t follow the precepts. The next group of four steps, mindfulness of the mind itself, leads to the jhanas according to the understanding of Venerable Ajahn Brahm, and attaining the jhanas while ignoring the precepts is simply impossible.

Nor is it easy to practice present moment awareness without precepts. Counting one’s breaths from one to ten, and repeating that practice, again and again, does not come easily if we are awash in sense desire. Nor can we send out thoughts of loving kindness if we don’t practice acts of loving kindness to all sentient beings in our daily life.

So we pause mid-way through Intermediate Zen to introduce the precepts. Following the precepts helps us practice mindfulness of feelings which is the antidote to the sense desires that dominate the untrained mind of the human dharma realm.

Mindfulness: A Practical Guide to Awakening