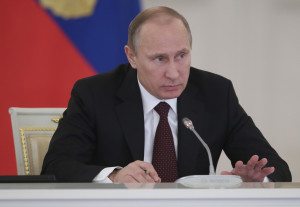 Congress, now completely controlled by war-mongers, seems eager to start a war with Russia. As always, they generate lies to support their insane plans. They paint Mr. Putin as a war-monger who invaded the Crimean peninsula for no good reason and they tell us that the U,S. has to arm the government of Ukraine against the onslaught of the Russian bear. As Buddhists, we need to question everything, even the Buddha’s teachings. That includes not blindly believing what the news reports say.

Commondreams.org has reported that the government of Ukraine is a neo-Nazi government. Just as Hitler outlawed the speaking of Hebrew and Yiddish as his opening attack against Jews, the Ukraine government outlawed the speaking of Russian, knowing full well that it is the native tongue of most residents of the Crimea. Having learned the dangers of acquiescence when confronted with bigotry, Putin ordered the occupation of the Crimean peninsula to protect the Russian speakers from harrassment. It is awful that no one came to the aid of the Jews when their government banned the speaking of their languages. Hoorah for Putin who came to the aid of the Russians of the Crimean peninsula before things got worse. He served notice that he would not allow the bigots in Kiev to stomp on speakers of Russian. If he did allow them to get away with banning the Russian language, the bigots in Kiev would then ban Russians from owning property, owning a business, and so on, just as the Nazis did to their victims. Banning a language is merely the first step of oppression. Putin did the right thing. He knows the Ukraine leaders are neo-Nazis and he stood up to them.

Shame, intense shame on the U.S. Congress for coming to the military aid of the neo-Nazis of Ukraine. If we U.S. taxpayers are required to support yet another war based on lies, what can we do? We can practice metta meditation every day. It has awesome power. We can stop the next war. All wars are unjust. The current push for war with Russia is beyond despicable and wholesome people of good will have to increase their lovingkindness meditation and direct it even to the neo-Nazis of Kiev who harbor disrespect for all things Russian. May the neo-Nazis be well. happy, calm and peaceful.

And everyone who reads this piece should send a copy of it to their congress person. Let them know that we are not idiots.

← A Funny Bit Of Zen History
Where Has All The Wisdom Gone? →