We should arrive at least a few minutes before formal sitting begins just to say hello to our fellow practitioners. Just like church. In most cases, we will leave our shoes outside or in a rack in the foyer. Whether we go barefoot or with socks is our choice.

At the appointed hour, the Han will begin to play. 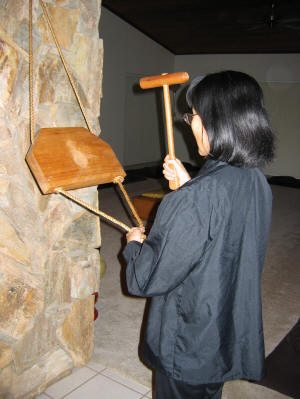 My wife, posing when the zendo was unoccupied

The Han is a flat wooden board that is struck by a wooden hammer. The person playing the Han will strike it once loudly, tap it twice lightly, and then repeat a loud, light, loud, light pattern several times and then the last loud will be preceded by two light taps so that the Timer will know that the last loud is about to be sounded. The Timer then brings a pair of wooden clappers together loudly, almost simultaneously with the final loud sounding of the Han.

Everyone walks to their mats during the playing of the Han and gets settled down before the Han stops playing. The player of the Han is watching the people in the room so he or she knows when to sound the final loud tap.

In most Zen Centers, the mat of the Timer is assigned to the Timer. You will see a mat with a clock or timer, wooden clappers, and a small hand bell positioned between the mat and the wall. If the Center has a Sensei, a Roshi, or a senior student who is the leader of the group, a mat will be reserved for them as well; it is usually directly beside the Timer’s mat at the entrance to the zendo. All other mats are open; few Centers have assigned seating except during formal retreats when assigned seating is the rule.

Some large Centers also have a mat reserved for each tanto, a senior student charged with wielding the kyosaku (encouragement) stick. Whenever the seating arrangement is somewhat complicated by a number of reserved mats, someone standing by the zendo entrance will direct the sitters toward their individual places.

In a typical Zen center, we will hear the small hand bell ring three times as soon as the Han playing has finished and the wooden clappers have been sounded. The idea is to settle down as the three rings are sounded, spaced a few seconds apart. By the sounding of the last bell, we should be settled into a position that we can hold without movement for at least thirty-five (35) minutes. Some centers sit for twenty (20) and some sit forty (40) minutes or even longer. Call ahead or check the website if visiting an unfamiliar center.

The timer will ring the small hand bell one (1) or two (2) times when the sitting is over, depending upon the Center. In Chinese Ch’an centers, it is common for people to perform a short self massage before rising from the mat. In Japanese Zen centers, everyone performs a palm-to-palm bow while still seated when the bell rings, and rises with no massage.

After arising, we stand on the floor in front of our mat/zabuton, with hands in the gassho (palm-to-palm) position and facing away from the wall. When everyone is standing, the timer rings the small hand bell again, and we all bow to one another at the waist, bending about forty five degrees. We then turn to our left and begin kinhin, following a clockwise path.

Although the practice can differ between Zen Centers, the typical kinhin is a single file walk at normal speed. We remember the person in front of us so if we leave the kinhin line to get a drink or go to the bathroom, we will be able to fall in behind that person as we re-enter the kinhin line. The person in front of whom we are stepping will have their eyes down so we lower our right hand and perform a wave as we step in front of them. The kinhin will typically be traveling in a clockwise direction. If in a counterclockwise kinhin, the left hand would be waved.

Some Centers will advise us to place our hands over our stomach so that our elbows are bent ninety degrees with forearms parallel to the floor.

As strange as it may seem now, we will come to appreciate the sound of the Han, the wooden clappers, and the hand bell. We will feel right at home, content in the knowledge that we are doing what a Buddha does.

It is perfectly OK to practice counting-the-breath meditation without a teacher. However, we eventually will want to talk to someone who is qualified to discuss our meditation. A Sensei or Roshi may assign a koan or shikantaza (just sitting) instead of a breath practice; however, they will do only what they feel is best for us after they become familiar with our practice.

Zen has several schools in China and Japan but in the U.S., most Zen Centers are either Soto or Rinzai but some Centers blend Soto and Rinzai practices together. The Zen centers of the Roshi Kapleau or the Roshi Aitken lineage, for example, sit facing a wall, Soto style, but most of the practitioners are working on teacher-assigned koans, which is a Rinzai practice.

In the Soto tradition, any one who has practiced consistently for at least ten years is given authority to teach.

In the Rinzai tradition, authority to teach is much more difficult to obtain. The student must “pass” a large number of koans, for example, and the process typically takes more than ten years.

Both schools have their advantages and disadvantages, but ultimately they are the same. If our practice develops faster by following a Rinzai teacher, we will still maintain a meditation practice for the rest of our life. So it cannot be said that Soto is long, slow, and gradual and Rinzai is short, fast, and abrupt. Both require a lifetime of practice. 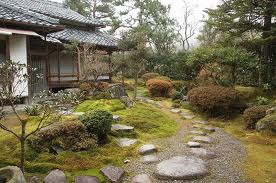 Read what Master Hsuan Hua has to say about the various sects of Buddhism. The magazine of Master Hsuan Hua’s organization (The Dharma Realm Buddhist Association, located near Ukiah, California at The City of Ten Thousand Buddhas) is The Vajra Bodhi Sea. It is well worth subscribing to.

A period of formal sitting meditation is usually concluded by chanting The Four Bodhisattvic Vows, usually shortened to The Four Vows. A Boddhisattva is a Buddha-to-be. In a typical Zen center, instead of ringing a bell when the last meditation round is over, the lead chanter will begin the chant by intoning:

All beings without number…

and then the members of the group join in and conclude the first line and the remaining three lines of the chant:

I vow to liberate.

Dharma gates, beyond measure, I vow to penetrate.

The Great Way of Buddha, I vow to attain.

At the obvious, mundane level, the first line of the chant means what it says: That the chanter, as a Buddha-to-be, will work to spread the Buddhadharma so that all sentient beings can attain Buddhahood.

The great Bodhisattvas have already vowed that they will not enter into Nirvana, the first dharma realm, until the hell worlds are empty and all sentient beings have attained Nirvana. Like a captain of a sinking ship, they work to save themselves last. The Earth Store Bodhisattva is one of those Bodhisattvas.

On a more subtle level, the beings referred to in the first line are our thoughts. To liberate all beings is to stop clinging to our thoughts.

In Buddhism, everything can be understood at an obvious or mundane level, a more intellectual level, and a level that is not renderable in words. It is the continual, mindful recitation of The Four Vows at the conclusion of a formal round of meditation that leads to the beyond-words level.

The other three lines are self-explanatory, at least at the mundane level, but they require hard work. Try uprooting endless blind passions! That’s why Zen is a practice. We can select a passion that we would like to be free of and work on uprooting it. It requires patience, perseverance, and practice.

There is an interesting flow to the four vows:

The vow to liberate all sentient beings obviously begins at home; we surely cannot liberate others before we have liberated ourself.

To liberate all sentient beings including ourself requires no longer clinging to our thoughts, to our endless blind passions that must be uprooted.

And uprooting endless blind passions requires penetration of Dharma gates beyond measure, the study of sutras, repentance…all aimed at the attainment-realization of Buddhahood.

A young monk in his studies came across a passage saying that a certain great master had meditated for eons without attaining Buddhahood. Discouraged, he went to the Abbot of the monastery and inquired: “Why should I bother to meditate? Why did this great master fail to attain Buddhahood after so many lifetimes of meditation? How can there be any hope for me?”

The young monk understood, and happily returned to the meditation mat.

“From the very beginning, all beings are Buddha.”

Buddhahood is inherent in all of us and it is not something we attain. When we vow to attain Buddhahood, the vow is to wake up and experience the Buddhahood that has been there all along. Not to intellectually attain Buddahood, but to experience it. 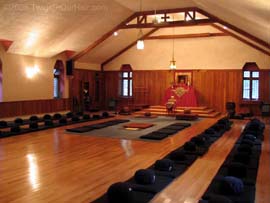 By cultivating happiness and Loving Kindness, overcoming greed, following the precepts, taking refuge, chanting, reciting the Buddha’s name, studying the sutras, sitting twice a day in meditation, and sharing the Buddhadharma with others, all of which are Dharma gates, we are not causing awakening or enlightenment to occur but we are creating the conditions that allow it to occur.

Repeating the four vows at the conclusion of a formal meditation session is another way of reminding us that Zen practice never ends; we don’t get up from the mat and forget all about zazen. We conclude by vowing to wake up and that keeps the meditation alive as we walk to our cars in the parking lot or head for the subway and re-enter the mundane world.

I once thought it would be funny to tell my Sensei that I had just discovered to my chagrin that I had been reciting The Four Vows incorrectly for years. I then chanted:

All beings without number, I vow to penetrate;

Dharma gates beyond measure, I vow to liberate;

The great Way of Buddha, I vow to uproot.

He didn’t think it was funny.

But he did his best impression of the Queen and said:

“We are not amused.”

We meditate in the traditional Zen way at night before going to bed. A night sitting is known as a yaza sitting. “Ya” means night and “za” is to sit. Even for beginners, a single daily meditation builds a weak foundation. A night time sitting, just prior to retiring, is helpful.

At the conclusion of our yaza, we recite the four vows:

I take refuge in the Buddha, and resolve that with all beings I will understand the Great Way, whereby the Buddha seed may forever thrive;

I take refuge in the Dharma, and resolve that with all beings I will enter deeply into the sutra treasure, whereby my wisdom may grow as vast as the ocean;

I take refuge in the Sangha, and in its wisdom, example, and never failing help, and resolve to live in harmony with all sentient beings.

These are the Three Refuges, the taking of which is traditionally associated with entering the Buddhist path.

We conclude with kinhin practice, completing the circle by ending the day as we started it.

Thank You and OK!: An American Zen Failure in Japan