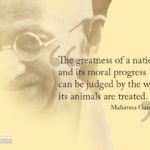 The back of the T-shirt worn by the guy in front of me as I waited in line at Chipotle carried one of Gandhi’s most well-known quotes:

The greatness of a nation and its moral progress can be judged by the way its animals are treated.

I try not to be judgmental, but this guy’s body type was not that of a vegetarian or vegan. He was corpulent. So I was not surprised that he skipped the tofu (sofritas in Chipotle-ese) and ordered chicken and double beef. I can only guess that he interpreted Gandhi’s saying as urging people to be nice to their pets. Who knows? Or maybe he went much further in his own mind and believed that “food animals” should be slaughtered humanely. Maybe he even thought that “food animals” should be uncaged, i.e., free to roam before they were slaughtered so that he could enjoy a protein-rich lunch to nurture his morbidly obese body.

“Food animals” were obviously not on his compassion radar. No doubt he sees himself as urging his fellow Americans to join him in achieving the same greatness and moral progress that he has achieved in being nice to cats and dogs and treating “food animals” with kindness until it’s time to end the kindness.

I couldn’t help but recall comedian Steve Martin’s line: “How can you BE so damn dumb?”

I have been trying to make some sense of my wife’s abrupt passing after a lifetime of perfect health. She was diagnosed on February 25, 2015, rudely, shockingly, and unprofessionally told by a CT scan technician that she had four weeks to live, and passed away on March 22, 2015, the Chinese celebration day of… END_OF_DOCUMENT_TOKEN_TO_BE_REPLACED

The U.S. President now wants Congress to authorize the use of military force in Iraq, again. Having ended “combat operations” (murder) in 2014, now we are supposed to go back in again because of the Islamic State/ISIS/ISIL. Why did the Islamic State come into existence in the first place? Because our troops were invading Iraq.… END_OF_DOCUMENT_TOKEN_TO_BE_REPLACED

Congress, now completely controlled by war-mongers, seems eager to start a war with Russia. As always, they generate lies to support their insane plans. They paint Mr. Putin as a war-monger who invaded the Crimean peninsula for no good reason and they tell us that the U,S. has to arm the government of Ukraine against… END_OF_DOCUMENT_TOKEN_TO_BE_REPLACED

In the early days of the Clear Water Zen Center, several members of the Miami Zen Center would cross the Florida peninsula from east to northwest to attend sesshins in Clearwater which is a Tampa Bay town half way down the peninsula, about a five hour drive. At that time, Roshi Kapleau was still healthy and dividing his… END_OF_DOCUMENT_TOKEN_TO_BE_REPLACED

For many years meat-eaters have tried to cure me of my vegetarian views by advising me that animals, unlike people, have no souls and therefore it is OK to kill and eat them. “God put them on this earth for us to eat. That’s what animals are for,” they conclude. Rational people, on the other… END_OF_DOCUMENT_TOKEN_TO_BE_REPLACED

Don’t just sit there – do something! Conventional wisdom Don’t just do something – sit there! Buddhist wisdom This website is about practice; we try to minimize philosophy. As Red Pine says in his commentary on The Heart Sutra: Buddhism is better understood as a skill or an art to be practiced and perfected,… END_OF_DOCUMENT_TOKEN_TO_BE_REPLACED

Introduction to Buddhist Practice Nirvana is the highest happiness…the Buddha, as quoted in The Dhammapada, verses 203 and 204.  If we complete this course, it will help us develop the Bodhi Mind – the aspiration to achieve enlightenment for the benefit of all sentient beings. If we have a desire to attain enlightenment for our… END_OF_DOCUMENT_TOKEN_TO_BE_REPLACED

Step 2 – Finding the Footprints The Ninth Dharma Realm Along the riverbank under the trees, I discover footprints. Even under the fragrant grass, I see his prints. Deep in remote mountains they are found. These traces can no more be hidden than one’s nose, looking heavenward. Finding the Footprints Loving Kindness (metta) All mankind’s… END_OF_DOCUMENT_TOKEN_TO_BE_REPLACED

← Older posts
How To Practice Zen